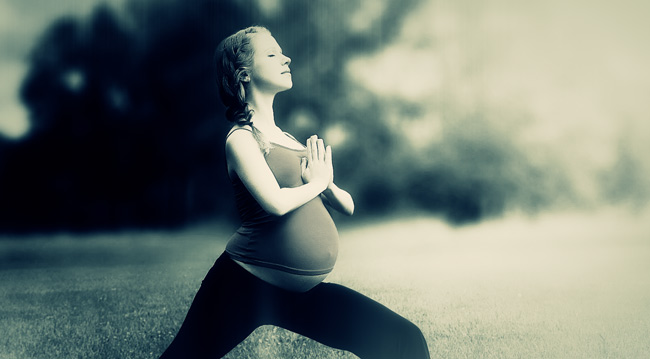 Stages Of Pregnancy- Abilities and Precautions

The amount of women who practice yoga throughout pregnancy has dramatically increased in recent years. This means that more pregnant women will be attending your classes even if they're not designed for prenatal women. This information is designed not only to aid prenatal class design but also deal with prenatal practitioners who wander into the average yoga class.

Facts you should know regarding Prenatal Yoga

There are hundreds of changes taking place in a woman's body during pregnancy. Throughout their pregnancy the skeletal body changes dramatically, as well as the respiratory system and the cardiovascular system.

Body fat during pregnancy increases an average of 5%. The average weight gain is around 30 pounds.

Continual modifications have been made in the world of yoga to adapt to the needs of prenatal practitioners. Modifications include safety considerations for practitioners and the child they carry.

Woman pregnant should take a light to moderate approach to exercise to be on the safe side. There is no evidence showing that light exercise is in any way bad during pregnancy. Evidence shows quite the opposite so rest assured women can continue to enjoy the benefits of yoga throughout pregnancy.

The safety of the fetus is obviously the primary concern during any yoga class so medical supervision is often advised in case there is any special conditions or considerations given by a specialist monitoring the pregnancy.

Evidence has shown woman who practice yoga throughout their pregnancy have increased energy levels and a much lesser incidence of low back pain associated with carrying the weight during pregnancy.

Evidence has also shown a reduction in inflammation in the extremities when yoga is practiced regularly throughout the pregnancy.

Certain stretches in yoga really aid the natural birth process by allowing a greater opening around the hips and groin. Evidence indicates that practitioners who choose to practice throughout the pregnancy have less problems with labor and delivery. This also means a reduction in labor time and the need for surgical intervention.

Pregnant woman have a higher rate of hyperglycemia during exercise and at rest.

In this course you will learn how to identify many aspects of stages in child birth and what yoga poses can help and the ones that should be avoided.

Physical Exam
In the physical exam you are asked to demonstrate many of the modifications involved in prenatal considerations.

Blood Flow and the Fetus Safety
Research has shown that certain postures in yoga cause restrictions in blood flow. proper flow of nutrient rich blood must be supplied to the fetus with ease. It is best to avoid yoga postures that severely restrict areas of the body as this could result in cutting off essential blood and oxygen flow to the fetus. However stretches and postures that loosen the area around the uterus, torso and hips aid in an increase in the blood rich nutrients and oxygen flow to the fetus.

Respiration
1. Woman should be aware of the increased oxygen that is demanded from the body during pregnancy and be continually reminded to breathe properly throughout class.

2. Pregnant women breathe 50% more air per minute due to an increase in something known as tidal volume. The tidal volume is the amount of air that can be taken into the body each breath. This is the body's natural response to deal with the demands of increased oxygen throughout the body.

Contraindication Warning Signs
1. Pain of any kind that suddenly comes on is to be taken seriously and participation in yoga class should be immediately stopped.

2. Uterine contractions occurring repetitively within a 15 minute period are less.

3. On the onset of any kind of bleeding in the vagina area or fluid leakage.

4. Sudden dizziness, shortness of breath and faintness indicate a need for immediate rest.

2. Holding standing poses for prolonged periods of time. This can aggravate joint inflammation in the feet, ankles and knees during pregnancy.

3. Any exercises that could result in loss of balance causing potential harm to the fetus should be avoided. This should be applied especially during third trimester. Stability must be properly demonstrated before allowing practitioners to move into balancing poses.

Practitioners that are going through pregnancy often feel their body working harder than normal. In fact the body resembles a low intensity exercise response throughout pregnancy. This is because a woman's body is always in a state of work during pregnancy.

Consider avoiding balancing poses during pregnancy as balance is harder to achieve and the results of losing balance are risky. If you must practice them make sure you have good stability before performing balancing poses.

Musculoskeletal System
Hormones are released by the body to open up the ligaments and muscles during the first trimester. This is due to the changes that are occurring within the body and the adapt ions the body has to make. The hormones relaxin and progesterone cause the muscles around the hips, lower back and pelvis to release and become more flexible. This causes the joints to be a little less stable so care must be taken when entering postures. Combined with a weight increase in pregnancy special care must be taken.

1. Changes in the pelvis include slow progressive anterior tilt increasing as weight increases.

3. Changes can occur in the upper back due to the weight of the breasts increasing. The symptom is known as Kyphosis or hunchback and obviously affects women with large breasts more.

All these symptoms can lead to an extreme condition known as kyphotic lordic postural alignment. This is an extreme exaggeration of the spines "S" curve.

Pelvic Floor Weakness - The pelvic floor is a combination of muscles ligaments and tissues that support the organs of the pelvis. These are: the uterus, vagina, bladder, urethra, and rectum.

Diatasis Recti - Known as abdominal separation is caused when the growing fetus stretches the abdominal wall beyond it's tolerance levels and the Linea Alba. connective tissue for the abdominal muscles) breaks.

Ligament Irritation - The broad ligament, round ligament and inguinal ligament are commonly strained during pregnancy.

Pubic Pain - The symphysis pubis opens throughout pregnancy and separates to some degree during the birthing process. Either of these occurrences can cause irritation, pain and damage to the ligaments.


Sciatica - Sciatica refers to pain around the buttocks and tailbone, shooting pain and weakness, in the leg. It is caused by injury to or compression of the sciatic nerve.

Sacroiliac Joint Dysfunction - The Sacroiliac joint is the joint where the sacrum attaches to the pelvis. Pain and problems can occur when it shifts into the wrong position, moves too little or too much.

First Trimester
Since the first trimester is so important for the formation of a healthy fetus, education designed to protect the fetus should be introduced as soon as possible. Methods of safety edging on the side of tremendous caution should be performed throughout a yoga class.

The hormones relaxin and progesterone cause the muscles around the hips, lower back and pelvis to release and become more flexible.

Third Trimester
Due to the high demand of oxygen and nutrient rich blood during the third trimester practitioners find their ability to exercise is greatly reduced and fatigue sets is much faster.

Third Trimester Respiration
The oxygen consumption of the body increases 20% to 30% during the third trimester. This is on top of an already increased oxygen demand from the first two trimesters. Towards the third trimester and throughout the third trimester the baby's growth causes the diaphragm to push upwards. This means that the pregnant woman has to breathe much harder in order to push the uterus down to receive a deep breath. This requires more energy use for respiration and further reduces the available oxygen which is already in high demand. To compensate for all of these things the ribs open sideways more than usual allowing more oxygen to fill the lungs.

Special attention must be given to something known as supine hypotension. When lying on the back in the third trimester especially the way it of the child pushes down causing the Venus return of blood flow to be impaired. The major area of the uterus pushes against is the inferior vena cava a major passage of blood flow. If the fetus is continually subjected to a restriction of blood flow a condition called hypoxia can occur which may lead to development disorders. Avoid exercises in the supine position after the first trimester.