For a long time i have been using thinly sliced garlic to kill MRSA in it's early stage. It seem the university of Nottingham has found a way to kill it with a little shit and garlic. Just between me an you you only need the garlic. Leave it on just till it stings. (Not more than 20 minutes each time) Re-apply if needed.

A thousand-year-old medieval remedy for eye infections which was discovered in a manuscript in the British Library has been found to kill the superbug MRSA.

Anglo-Saxon expert Dr Christina Lee, from the School of English, at Nottingham University, recreated the 10th century potion to see if it really worked as an antibacterial remedy.

The 'eyesalve' recipe calls for two species of Allium (garlic and onion or leek), wine and oxgall (bile from a cow’s stomach).

It describes a very specific method of making the topical solution including the use of a brass vessel to brew it, a strainer to purify it and an instruction to leave the mixture for nine days before use.

“We were genuinely astonished at the results of our experiments in the lab,” said Dr Lee.

“We believe modern research into disease can benefit from past responses and knowledge, which is largely contained in non-scientific writings.

“But the potential of these texts to contribute to addressing the challenges cannot be understood without the combined expertise of both the arts and science.”

Dr Lee translated the recipe from Bald’s Leechbook, a leatherbound Old Enlgish manuscript which is kept in the British Library.

In 2012 I managed to pick up MRSA and it dissolved the skin in my leg and infected my blood. If i would have treated it with garlic in it's early stages I would not have had a scar like a bullet in my leg.

1. Use alcohol on your feet to kill most of the bacteria after class.
2. Use yoga trowels. This way you limit your exposure to large surface areas ( Your Mat) that could contain bacteria that is harmful.

Something to think about!

The bottom of your mat touches the yoga floor. You then roll your mat so the bottom of the mat spreads over the top.

Who can wash their yoga mat every time?

You can wash a yoga towel. Contaminants are spread from hospitals to health clubs to yoga studios. These are harmful and MRSA is just one of the nasty ones. 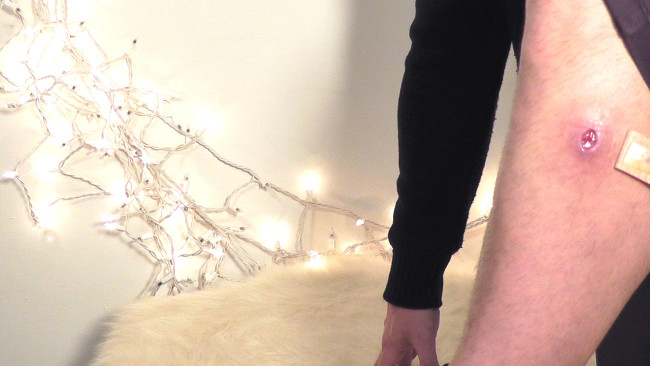